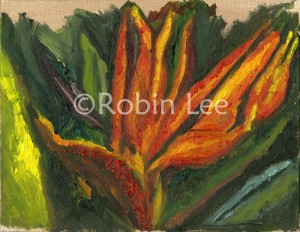 Motivation was after a trip from Hawaii I took several pictures of the local flowers one flower was the Bird of Paradise. I decided to paint the flower from a photograph to create oranges yellows and greens another study of color. 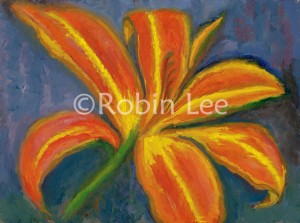 Robin’s vision of color harmony through the use of complementary colors. Cool colors juxtaposed with warm draw the mind’s eye into the memory of the experience of a bittersweet moment; the image becoming the metaphor for the memory. Again, texture and simplified form dominate in the style that allows the perception of the viewer to color from memory and complete the image.

This painting is in Oil and was completed July 2012 Prints available for sale. 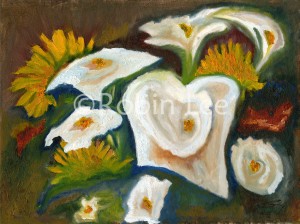 Calla Lilies (Pythagoras) first described the octave and the pentatonic scale. Euclid described the Golden Mean, proportions that are part of nature and intrinsically pleasing to the eye. The Fibonacci spiral is evident not only in nature, but in this deceptively simply rendering of Calla Lilies and Sunflowers. Consider that Calla Lilies are often associated with death and dying while sunflowers are seen as life and birth. Taken with the perfect proportions of the Golden Mean, the image becomes an apt metaphor of life that is both ephemeral and eternal: a paradox that can never be proven because it can only reference itself.

This painting is in Oil and was completed March 2013. Prints available for sale. 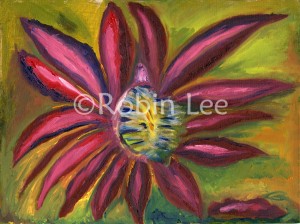 A bold statement that suggests vitality and finitude, name’s color palate directs the eye to the blue center, as if tosuggest that this is the subject, the place of regeneration and rebirth.But,almost casually, there is a reminder of finitude: a fallen petal that reminds us that we are dust and to dust we shall return.

This painting is in Oil and was completed March 2013.  Prints available 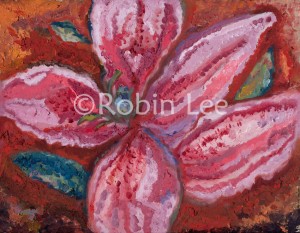 Is another riff with a color surprise. Note the use of shades of reds, and simplified rendering of the subject. There is an intentional distortion of perspective that suggests a primacy of color over form. The execution suggests a liquidity, flow, which is punctuated by blues and greens that suggest form in motion.

This painting is in Oil and was completed March 2012.  Prints available for sale. 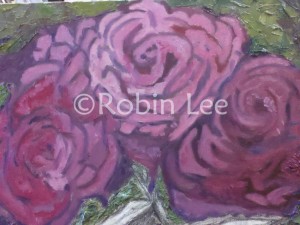 The use of physical depth rather than a representation of depth is the key feature of this painting. Like an extended jazz chord, this image creates an illusion of shallowness. The eye is drawn to the center where depth is an allusion. The peripheral greens that offset the roses are where the real music is played. Robin’s use of paint is almost sculpture; juxtaposing the representation of three-dimensionality against the reality of length, width, and depth. 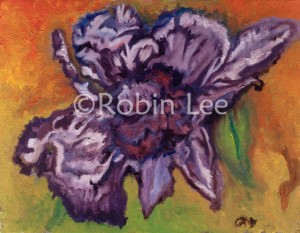 Use of highly saturated colors in this abstraction leave the viewer with an impression of an orchid rather than a rendering of the orchid. The strong impressionist overtones are what first greets the viewer’s eye. But, the photographic use of focus and distortion of focus are clear in the stem that is suggested rather than rendered.

This painting is in Oil and was completed October 2012 Prints available for sale. 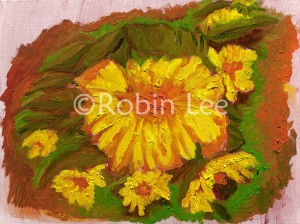 uses minimal form with a focus on texture and color. It gives a visually vivid impression of the experience of a sunflower rather than a sterile rendering of the subject. Her use of secondary and tertiary colors draw the eye to the yellow in the petals. Eschewing formalism, this abstraction of the experience of the flower suggests a youthful exuberance and celebration of texture and form. 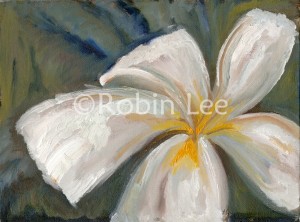 Is one of Robin’s more accessible images. Her color palate is quite conventional in this image, the background functioning as a means to highlight the subject. The composition is  where the surprise lies: it is eccentric, or so it appears. This is a study in positive and negative space that is simply lovely to behold.

This painting is in Oil and was completed December 2012 Prints available for sale. 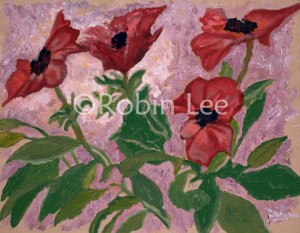 The simple power of the red image suggests an infusion of life, like a flattened fifth creates a harmonic dissonance. Mauve balanced against green sets of a series of changes that, like a blue note in jazz, creates a tension that pulls the listener into a resolution. Her image of the Red Poppy clearly demonstrates a neo-impressionist note that suffuses this work with a vision that transcends the simplicity of the subject. This painting is in Oil and was completed December 2011 it was inspired and referenced by and Oil painting of Anemones by Don Stern a study in color.